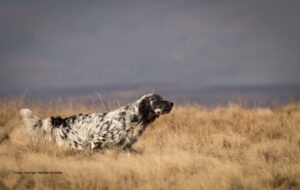 The English Setter is one of five breeds in the Setter and Pointer Sub group, the others being the English Pointer, the Gordon Setter, the Irish Setter and the Irish Red and White Setter. These dogs are used primarily as locating dogs in the UK.  They quarter the ground into the wind, using air scent to locate their quarry and once scent of the quarry is found they freeze on point or set the birds (a pointer ‘points’ and a setter ‘sets’ as their names suggest).  The dog will hold the point until given the command to flush, or ‘produce’ the birds. UK Setters and Pointers are used mainly for shooting, falconry and counting – in particular grouse counting, so estates have an idea of what breeding stock they have in the Spring and then what density of game there is in the Summer so they can plan their shooting days.  As the dogs hold the point and produce the coveys on command it gives the estate gamekeepers the ideal opportunity to have a good look at their grouse and so see their success through the breeding season.  Young grouse can sit very tight in the heather so having a dog that doesn’t retrieve ensures there are no casualties. Shooting over Setters and Pointers is a very pure and traditional sport and is like no other form of shooting. A day following a good team of Setters and Pointers is hard to beat.  It is a social day as everyone walks in a group with the gamekeeper watching the dogs running effortlessly across hard terrain in search of game.  The less the density of game the wider the dogs will range to find them.  It is a day which can be enjoyed by enthusiasts from any walk of life and of any shooting ability.  The more experienced guns will stand further away from the dog creating a more sporting shot and also selective shot (picking out the old or weak looking birds from coveys) and the less experienced shot can stand closer to the dog where he/she can listen to guidance from the gamekeepers or handlers. The English Setter and the English Setter Club are both full of history, the English Setter Club being the oldest Gun Dog Club in the country, it was founded in 1890, at the Curzon Hall in Birmingham. The Breed can be traced back to the 14th Century and before the advent of shot guns, were used to locate game birds so they could be netted either by estate staff looking to feed the Laird of even the poacher with similar intentions! In the UK the show strain outnumber the working strain of the breed and the breed on the whole is on The Kennel Club’s Vulnerable breeds list.  However, English Setters have had resurgence in the field over the last few years and are now one of the top winning breeds in UK Field Trials. The English Setter is one of the world’s most popular breeds and is one of the world’s most popular shooting companions. Further information on English Setters can be found on The English Setter Club website: www.englishsetterclub.co.uk Fiona Kirk, English Setter Club Thank you to Rebecca Goutorbe for the use of the image.