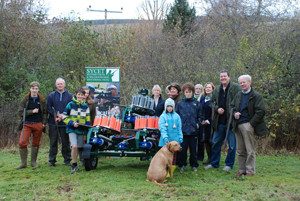 A grant from a wind farm community fund has allowed BASC Scotland to purchase a trailer-mounted system of clay-pigeon traps to make shotgun coaching more flexible.

A successful application to the Griffin Calliacher Community Fund has allowed the UK’s largest shooting organisation, the British Association for Shooting and Conservation (BASC), to purchase a Promatic Huntsman XP Trailer, a simulated game machine which provides a wide range of target types.

The community fund recognised the work that BASC Scotland has already carried out for many years in Highland Perthshire, by providing shotgun coaching at community events and for local schools.

BASC Scotland director Colin Shedden said: “BASC Scotland is well equipped to provide shotgun coaching of the highest quality at large events, such as the Scottish Game Fair and Highland Field Sports Fair.  However, when it comes to small community events and school groups we were only able to help when a number of staff were available.  The provision of this trailer now means that one of our BASC accredited coaches can set up a coaching session for school or community groups on his or her own.

“We anticipate that the clay shooting at the Commonwealth Games will stimulate a lot of interest next year and we hope to be able to deliver coaching wherever we can. Already, a number of secondary schools in Scotland receive regular coaching from BASC staff.  We would be delighted to hear from any other schools that would be interested in trying this sport.  Now we have the trailer we have an even greater ability to deliver coaching locally and nationally.”

The grant of £10,773 was paid by Scottish and Southern Energy from the Griffin Calliacher Community Fund.  An additional £1,000 was made available by the Scottish Youth and Countryside Education Trust, emphasising the investment in young people.

Photo shows members of Amulree and Trochry Community Fund with the new trailer, who are amongst those who supported the application and will benefit from BASC’s grant.

Hearthstanes is in the picturesque Tweedsmuir Hills of the Scottish Borders, and within easy reach of Edinburgh and Glasgow. We ...
DETAILS

Araminta Campbell offers a personalised service for the design and production of bespoke tweed. She is well practised in producing ...
DETAILS

Newark Castle shoot provides both pheasant and partridge mixed shoots. We are happy to provide driven days which would encompass ...
DETAILS

Glenavon Estate, located near Tomintoul, is a traditional sporting estate of approximately 42,000 acres, set in the Cairngorms National Park, ...
DETAILS

Dalriada Luxury Lodges is a family-run business with eight self-catering lodges nestled on the Stonehaven coastline, Aberdeenshire. The perfect base ...
DETAILS

Culdearn House is situated in the heart of Speyside in the Cairngorm National Park, surrounded by stunning scenery. Ideally situated ...
DETAILS

Lochan Estate lies between Crieff and Dunkeld in Perthshire. This area is returning to its former glory as one of ...
DETAILS

Glenprosen is a first-class sporting estate in one of the most accessible parts of the Scottish Highlands. Extending to about ...
DETAILS

Dunan Estate is situated on the banks of the River Gaur on Rannoch Moor beyond the head of the beautiful ...
DETAILS

Invercauld Estate has been in the ownership of the Farquharson family for many centuries. It is world-renowned for the quality ...
DETAILS

Peter Backhouse is a professional chef to 2 AA Rosette standard. Peter has worked in London and for private sporting ...
DETAILS

Scotland’s leading providers of salmon and trout fishing experiences in the heart of Royal Deeside. Will & Al are both ...
DETAILS

Mar Lodge Estate covers over 72,000 acres of spectacular Cairngorms mountain and moorland landscape, offering some of Scotland’s most rewarding ...
DETAILS

Alvie & Dalraddy Estate totals 13,000 acres of land stretching from the River Spey, northwest over the Monadhliath Mountains to ...
DETAILS

4-star Golf View is a beautiful location for a break, with fantastic views of the sparkling Moray Firth and a ...
DETAILS

Bandirran Estate has quality shooting in Perthshire. Set in the Sidlaw Hills between Perth and Dundee, great drives have been ...
DETAILS

Lude Estate, Blair Atholl, is situated in stunning Highland Perthshire and on the edge of the Cairngorms National Park.  With ...
DETAILS
Next
Scottish Country Sport Tourism Group