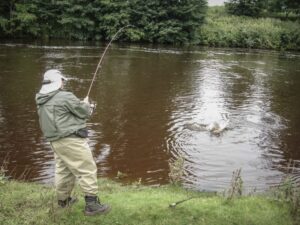 The following update relative to The Conservation of Salmon (Scotland) Regulations 2017 has been issued by the Scottish Government.

“Earlier this year we introduced a package of conservation measures to manage the exploitation of wild salmon on an annual basis according to its conservation status.  The assessment model for 2016 categorised 109 fishery districts and the 17 Special Areas of Conservation for Atlantic salmon resulting in the introduction of mandatory catch and release in areas where stocks were below their conservation limit.  I wanted to take this opportunity to update you on the assessment process for 2017, our engagement plans, the timetable for taking forward the regulation and the support package for angling clubs to market catch and release as a sustainable method of fishing.

Assessment of conservation status for 2017

During the previous consultation there was considerable comment on the methodology for determining conservation status and how the assessment model could potentially be refined to take into better account local conditions and data.  Work is now well underway to refine the model and complete the assessment for the 2017 fishing season.

In our last update we advised that we were at the start of a process of engagement with local biologists employed by Fisheries Trusts and the District Salmon Fishery Boards.  We have since set up the Marine Scotland and Local Biologist Liaison Group to coordinate the involvement of local biologists throughout Scotland in refining the data and methods used to determine conservation status and develop an agreed template for salmon conservation plans.

The liaison group have set up two technical working groups to consider the use of data and methods for determining exploitation rates and the sea age structure of salmon stocks around Scotland. Two further groups have been tasked with considering how we can make best use of electrofishing data and data collected from counters to determine the conservation status of rivers in both the short and long term.

The distribution of salmon stocks

Consultation is also underway with biologists throughout Scotland to refine our understanding of the distribution of salmon stocks. We have been working with the Scottish Fisheries Co-Ordination Centre to provide a simple web mapping tool to allow local biologists and others with local knowledge to comment on the distribution of salmon stocks we currently hold and use in our stock assessment.  It is our intention to incorporate these comments, where we can, in the assessment for the 2017 fishing season.  The mapping tool will remain live until the end of September and contributions can continue to be made until then and will be taken into account for the assessment for 2018.

As many of you will be aware the Cabinet Secretary for Rural Affairs, Food and the Environment announced our intention to move towards an assessment of conservation status on a river by river basis at the meeting of the Rural Affairs, Climate Change and Environment Committee on 9 March 2016.

We have been working with fisheries over the last few months to identify the numbers of fish taken on a river by river basis within the 109 fishery districts.  As well as the assessment at fishery district level we will be able to carve out single rivers or SACs and groups of rivers to be assessed separately.

Work is also underway to develop methods which take account of both flow conditions and the number of salmon entering the river outside the fishing season.  Significant progress has been made to refine the assessment process for the coming fishing season and I would like to thank stakeholders who have contributed data for their time and effort.

Timetable and engagement with stakeholders

We are currently working to complete the assessment process by the end of August and aim to consult with stakeholders during the month of September.  This is with a view to having the legislation in place before the end of the year.

As many of you are aware a number of angling clubs expressed concern during the extensive consultation period about the potential impact that mandatory catch and release could have on angling participation.  To help mitigate this potential impact the Scottish Government announced a funding package of up to £100,000 to support clubs concerned about the impact of the  measures.  I am now pleased to announce that FishPal have been appointed as the delivery partner for the programme to promote catch and release as a sustainable activity.

The two year programme will:

Any angling clubs keen to learn more about the programme and how to access support should complete the form on the FishPal website or alternatively they can contact Tom Cater on 01573 470 612 to discuss.”