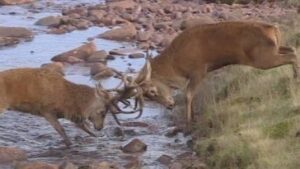 The annual deer rutting season is becoming increasingly important for Scottish tourism, according to the industry.

Red deer have always attracted visitors to the Scottish hills, with stalking still an important source of income for many estates.

But an increasing number of people are happy to pay simply to watch the animals at close quarters.

Many sporting estates are now offering to take tourists on “wildlife safaris”.

The red deer rut is one of the most dramatic sights in the Scottish wildlife calendar, with the season usually beginning in September and peaking in October.

And the sight of Britain’s largest land animals battling for supremacy and mating rights is helping to attract visitors to estates when the traditional tourism season is beginning to slow.

Sandy Reid, who acts as a guide for safari tours on the hills of the Atholl Estate in Highland Perthshire, told BBC Scotland that the deer were just one of the area’s attractions.

National tourism agency VisitScotland has been promoting the Scottish countryside around the world during the Year of Natural Scotland.

He said: “Across Scotland we are hearing very encouraging signs from the industry.

“Given the context of the challenging economic environment, especially in tourism across the world, we do seem to be punching above our weight and Natural Scotland as a themed year is giving us a real edge.

“Wildlife tourism itself is worth something in the region of £270m to the Scottish economy, so it is big business and Natural Scotland is big business.”