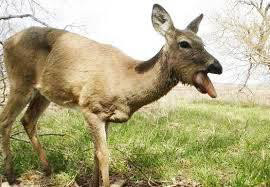 CWD has very recently been diagnosed in Scandinavia in a reindeer and also in moose. The risk of CWD entering the UK is therefore likely to have increased now the disease is present in Europe.

CWD is caused by a prion, a mutant folded protein, and belongs to the same group of diseases as scrapie, which affects sheep and goats, and “mad cow disease”, (bovine spongiform encephalopathy or “BSE”). This group of diseases are known collectively as “transmissible spongiform encephalopathies” or “TSE’s”, CWD is the most infectious of these, the name suggests a body sickness but it is actually degeneration of the brain and central nervous system which is the main symptom.

There is no evidence to suggest that it causes disease in people, or other species of animal.

CWD Key facts:
• CWD is fatal in any infected deer
• CWD is highly infectious and persists in the environment
• There are currently no treatments or vaccines available to control the disease
• All efforts to control the spread of CWD in the USA/Canada have so far failed and it is probably now beyond control.
• Preventing CWD from entering the UK is currently the only effective control measure

The prion is transmitted in deer body fluids and body parts including urine, faeces, saliva and several tissues in infected carcases. The prion can remain infectious in the environment for up to twenty years as it binds to the surface of soil particles and for several years on stainless steel. It defies normal farm disinfection and even some standard autoclave disinfection processes. Animals may take 18-24 months to exhibit clinical signs and they become increasingly infectious to others over time.
CWD is a Notifiable Disease and suspicion of the disease in any animal must be immediately reported to your local APHA Animal Health Office which can be found by using the Post Code search facility in the website.

If CWD were to become established in the UK stopping its spread is likely to be impossible, it could have major consequences:

A possible route of transmission into the UK could be through countryside users bringing in prions on contaminated clothing, footwear and equipment. A specific high-risk group would be hunters or stalkers who have hunted in countries where CWD is present.
Countryside users travelling abroad must be aware of biosecurity risks; especially the risks of transporting CWD when visiting USA / Canada / Scandinavia.

As a hunter, especially if hunting deer and becoming contaminated in an infected country the risks are much greater.

As a hunter considering using deer urine lures; do not trade in or use natural deer urine lures.
It may contain infected urine which can transmit CWD. If you do wish to use a lure ensure that it is a synthetic version, which many US hunters believe are equally effective.
Further information, including details of clinical signs of CWD and the action to be taken if disease is suspected, is available at: